Development of the maternal blood supply to the placenta 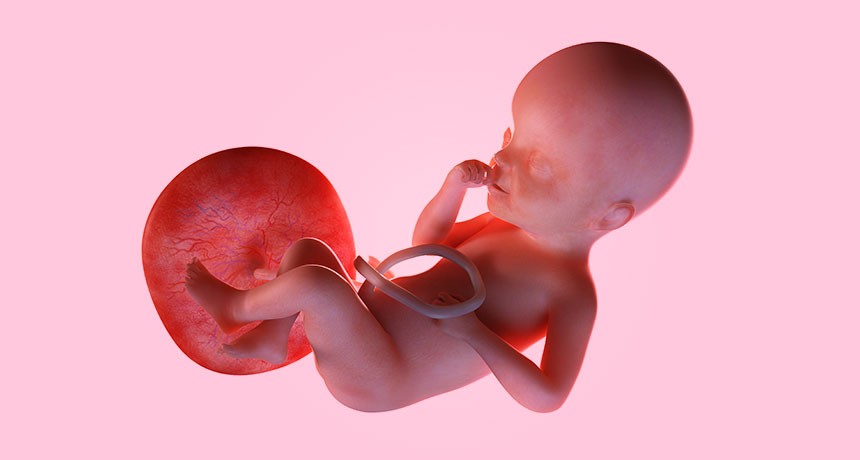 In preparation for implantation of the blastocyst, the endometrium undergoes decidulization. Spiral arteries in the decidua are remodeled so that they become less convoluted and their diameter is increased. The increased diameter and straighter flow path both act to increase maternal blood flow to the placenta. There is relatively high pressure as the maternal blood fills intervillous space through these spiral arteries which bathe the fetal villi in blood, allowing an exchange of gases to take place. In humans and other hemochorial placentals, the maternal blood comes into direct contact with the fetal chorion, though no fluid is exchanged. As the pressure decreases between pulses, the deoxygenated blood flows back through the endometrial veins.Maternal blood flow is approximately 600–700 ml/min at term. This begins at day 5 - day

Deoxygenated fetal blood passes through umbilical arteries to the placenta. At the junction of umbilical cord and placenta, the umbilical arteries branch radially to form chorionic arteries. Chorionic arteries, in turn, branch into cotyledon arteries. In the villi, these vessels eventually branch to form an extensive arterio-capillary-venous system, bringing the fetal blood extremely close to the maternal blood; but no intermingling of fetal and maternal blood occurs ("placental barrier"). Endothelin and prostanoids cause vasoconstriction in placental arteries, while nitric oxide causes vasodilation. On the other hand, there is no neural vascular regulation, and catecholamines have only little effect.

The fetoplacental circulation is vulnerable to persistent hypoxia or intermittent hypoxia and reoxygenation, which can lead to generation of excessive free radicals. This may contribute to pre-eclampsia and other pregnancy complications. It is proposed that melatonin plays a role as an antioxidant in the placenta. This begins at day 17 - day 22. Placental expulsion begins as a physiological separation from the wall of the uterus. The period from just after the child is born until just after the placenta is expelled is called the "third stage of labor". The placenta is usually expelled within 15–30 minutes of birth.

Placental expulsion can be managed actively, for example by giving oxytocin via intramuscular injection followed by cord traction to assist in delivering the placenta. Alternatively, it can be managed expectantly, allowing the placenta to be expelled without medical assistance. Blood loss and the risk of postpartum bleeding may be reduced in women offered active management of the third stage of labour, however there may be adverse effects and more research is necessary.

The habit is to cut the cord immediately after birth, but it is theorised that there is no medical reason to do this; on the contrary, it is theorized that not cutting the cord helps the baby in its adaptation to extrauterine life, especially in preterm infants.

The Journal Reproductive Immunology: Open Access aims to spread knowledge and promote discussion through the publication of peer-reviewed, high quality research papers on all topics related to the reproductive immunology. Authors are welcome to submit their manuscripts to our journal.

Pharmacokinetics is how a body processes a drug

Junction proteins of the blood–brain barrier