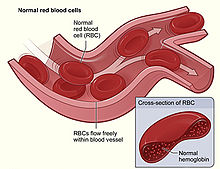 Vitamin B12 deficiency anemia, of which pernicious anemia is a type, is a disease in which not enough red blood cells are produced due to a deficiency of vitamin B12. The most common initial symptom is feeling tired. Other symptoms may include shortness of breath, pale skin, chest pain, numbness in the hands and feet, poor balance, a smooth red tongue, poor reflexes, depression and confusion. Without treatment some of these problems may become permanent.

Pernicious anemia refers to anemia that results from lack of intrinsic factor. Lack of intrinsic factor is most commonly due to an autoimmune attack on the cells that create it in the stomach. It can also occur following the surgical removal of part of the stomach or from an inherited disorder. Other causes of low vitamin B12 include not enough dietary intake (which can be a risk in a vegan diet), celiac disease, or tapeworm infection. When suspected, diagnosis is made by blood and, occasionally, bone marrow tests. Blood tests may show fewer but larger red blood cells, low numbers of young red blood cells, low levels of vitamin B12, and antibodies to intrinsic factor.

Because pernicious anemia is due to a lack of intrinsic factor, it is not preventable. Vitamin B12 deficiency due to other causes may be prevented with a balanced diet or with supplements. Pernicious anemia can be easily treated with either injections or pills of vitamin B12. If the symptoms are severe, injections are typically recommended initially. For those who have trouble swallowing pills, a nasal spray is available. Often, treatment is lifelong.

Pernicious anemia due to autoimmune problems occurs in about one per 1000 people. Among those over the age of 60, about 2% have the condition. It more commonly affects people of northern European descent. Women are more commonly affected than men. With proper treatment, most people live normal lives. Due to a higher risk of stomach cancer, those with pernicious anemia should be checked regularly for this. The first clear description was by Thomas Addison in 1849. The term "pernicious" means "deadly", and this term came into use because before the availability of treatment the disease was often fatal.

The symptoms of pernicious anemia come on slowly. Untreated, it can lead to neurological complications, and in serious cases, death. Many of the signs and symptoms are due to anemia itself, when anemia is present. Symptoms may consist of the triad of tingling or other skin sensations (paresthesia), tongue soreness (glossitis), and fatigue and general weakness. It presents with a number of further common symptoms,including depressive mood, low-grade fevers, diarrhea, dyspepsia, weight loss, neuropathic pain, jaundice, sores at the corner of the mouth (angular cheilitis), a look of exhaustion with pale and dehydrated or cracked lips and dark circles around the eyes, as well as brittle nails,and thinning and early greying of the hair. Because PA may affect the nervous system, symptoms may also include difficulty in proprioception, memory changes, mild cognitive impairment (including difficulty concentrating and sluggish responses, colloquially referred to as brain fog), and even psychoses, impaired urination, loss of sensation in the feet, unsteady gait, difficulty in walking,muscle weakness and clumsiness. Anemia may also lead to tachycardia (rapid heartbeat), cardiac murmurs, a yellow waxy pallor, altered blood pressure (low or high), and a shortness of breath (known as "the sighs"). The deficiency also may present with thyroid disorders. In severe cases, the anemia may cause evidence of congestive heart failure. A complication of severe chronic PA is subacute combined degeneration of spinal cord, which leads to distal sensory loss (posterior column), absent ankle reflex, increased knee reflex response, and extensor plantar response. Other than anemia, hematological symptoms may include cytopenias, intramedullary hemolysis, and pseudothrombotic microangiopathy. Pernicious anemia can contribute to a delay in physical growth in children, and may also be a cause for delay in puberty for adolescents.

Although the exact role of Helicobacter pylori infection in PA remains controversial, evidence indicates H. pylori is involved in the pathogenesis of the disease. A long-standing H. pylori infection may cause gastric autoimmunity by a mechanism known as molecular mimicry. Antibodies produced by the immune system can be cross-reactive and may bind to both H. pylori antigens and those found in the gastric mucosa. The antibodies are produced by activated B cells that recognise both pathogen and self-derived peptides. The autoantigens believed to cause the autoreactivity are the alpha and beta subunits of the H+/K+-ATPase.

Less commonly, H. pylori and Zollinger-Ellison syndrome may also cause a form of nonautoimmune gastritis that can lead to pernicious anemia.

Impaired B12 absorption can also occur following gastric removal (gastrectomy) or gastric bypass surgery. In these surgeries, either the parts of the stomach that produce gastric secretions are removed or they are bypassed. This means intrinsic factor, as well as other factors required for B12 absorption, are not available. However, B12 deficiency after gastric surgery does not usually become a clinical issue. This is probably because the body stores many years' worth of B12 in the liver and gastric surgery patients are adequately supplemented with the vitamin.

Although no specific PA susceptibility genes have been identified, a genetic factor likely is involved in the disease. Pernicious anemia is often found in conjunction with other autoimmune disorders, suggesting common autoimmune susceptibility genes may be a causative factor. In spite of that, previous family studies and case reports focusing on PA have suggested that there is a tendency of genetic heritance of PA in particular, and close relatives of the PA patients seem to have higher incidence of PA and associated PA conditions. Moreover, it was further indicated that the formation of antibodies to gastric cells was autosomal dominant gene determined, and the presence of antibodies to the gastric cells might not be necessarily related to the occurrence of atrophic gastritis related to PA.

Journal Gaining Broad Readership and High Impact around the World

Understanding the Biology of Body Weight Regulation in Children