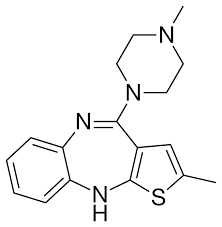 Olanzapine, sold under the trade name Zyprexa among others, is an atypical antipsychotic primarily used to treat schizophrenia and bipolar disorder. For schizophrenia, it can be used for both new onset disease and long term maintenance. It is taken by mouth or by injection into a muscle.

The first-line psychiatric treatment for schizophrenia is antipsychotic medication; with olanzapine being one such medication. Olanzapine appears to be effective in reducing symptoms of schizophrenia, treating acute exacerbations, and treating early-onset schizophrenia. The usefulness of maintenance therapy, however, is difficult to determine as more than half of people in trials quit before the six-week completion date. Treatment with olanzapine (like clozapine) may result in increased weight gain and increased glucose and cholesterol levels when compared to most other second-generation antipsychotic drugs used to treat schizophrenia.

National Institute for Health and Care Excellence, the British Association for Psychopharmacology, and the World Federation of Societies for Biological Psychiatry suggest that there is little difference in effectiveness between antipsychotics in prevention of relapse, and recommend that the specific choice of antipsychotic be chosen based on a person's preference and the drug's side effect profile. The U.S. Agency for Healthcare Research and Quality concludes that olanzapine is not different from haloperidol in the treatment of positive symptoms and general psychopathology, or in overall assessment, but that it is superior for the treatment of negative and depressive symptoms. It has a lower risk of causing movement disorders than typical antipsychotics.

The principal side effect of olanzapine is weight gain, which may be profound in some cases and/or associated with derangement in the blood lipid and blood sugar profiles (see section metabolic effects). A recent meta-analysis of the efficacy and tolerance of 15 antipsychotic drugs (APDs) found that it had the highest propensity for causing weight gain out of the 15 APD compared with a SMD of 0.74, Extrapyramidal side effects, although potentially serious, are infrequent to rare from olanzapine but may include tremors and muscle rigidity.

Symptoms of an overdose include tachycardia, agitation, dysarthria, decreased consciousness, and coma. Death has been reported after an acute overdose of 450 mg, but also survival after an acute overdose of 2000 mg. Fatalities generally have occurred with olanzapine plasma concentrations greater than 1000 ng/mL post-mortem, with concentrations up to 5200 ng/mL recorded (though this might represent confounding by dead tissue, which may release olanzapine into the blood upon death).